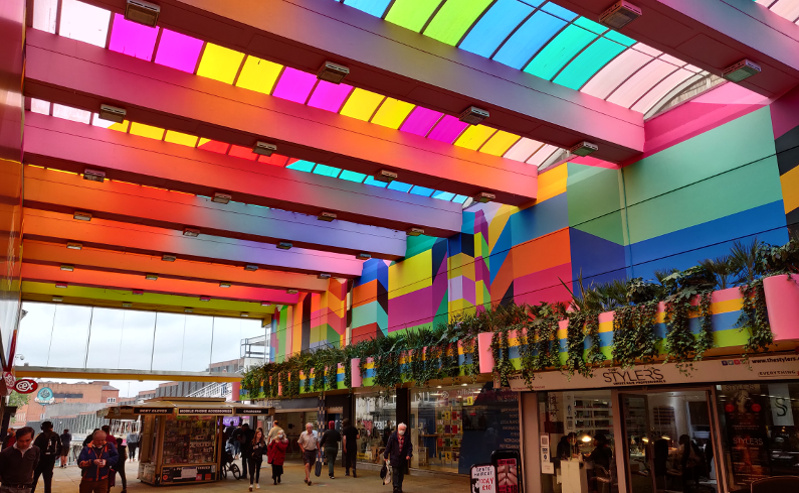 The UK City of Culture title is relatively new, with only two events having taken place so far. The first was Derry/Londonderry in 2013, a city I’ve visited, but not during their year of culture. In 2017, Hull had the accolade, and I took the opportunity to visit having spent time there as a student.

Jumping forward to 2021 and Coventry is the UK’s third City of Culture. A lot has happened since they were first awarded the accolade in 2017. With Covid-19 heavily impacting arts and tourism, it must have been a nerve-racking time to be programming a year of events as the country went in and out of lockdowns. With a delayed start, Coventry officially started its Year of Culture in May 2021 with the launch event delayed to June.

While perhaps not an obvious choice for City of Culture, but I’m sure people had similar views on Hull, Coventry is famed for its cathedrals, having the first pedestrianised precinct – and many other firsts when it came to post-war planning, and its motor industry and related businesses. However, none of this shout‘s ‘arts and culture’ in a big way.

The City of Culture award, presents places with the opportunity to raise their profile, attract new visitors and access funding. It is also intended to develop a legacy for arts and culture in the city by widening the participation and developing new cultural spaces.

I spent a weekend in Coventry to see what changes had occurred and if it felt like arts and culture was making its mark on the city.

On arrival it felt subdued, but the sense of arrival from the station was vastly improved. Subways have become above ground, gardens that open up views of the centre while the Grade II listed station has work going on to upgrade it.

The University has expanded to the point of taking over many buildings in the city centre from a former cinema to hotels and office blocks as well as vast swathes of new buildings (that are clearly  much more significant for the stakeholder in the development of the city) than perhaps they once were. There is some questionable architecture from a library to (as seen in many cities) cladded student accommodation towers.

Having recently finished reading Concretopia (John Grindrod), it was good preparation for revisiting Coventry’s post-war centre and I had a new appreciation for some of its components.

The centre is still predominantly retail, however there were few empty premises and the precinct is clearly well used. Changes to the Lower Precinct were very successful compared to my memory of the space. It was good to see the Cathedral Lanes Shopping Centre which never quite seemed to find its purpose, now converted into F&B which worked well, offering great frontage onto Broadgate. I’d also forgotten the large number of historic buildings which given the size of the city (small!) really bring some grandeur.

It appeared that there were carparks everywhere! Yet, Coventry is trialling residents giving up their older, polluting vehicles in exchange for public transport vouchers so it will be really interesting to see the results.

On the edge of the centre, Far Gosford Street with Fargo, offers pop-up opportunities, small business and street food while Spon Street continues to be an evening destination.

The centre has lots of, what looked to be new, public realm both concrete and grass and many spaces which most places would love to have for outdoor events and regular programming.

Picks for the City of Culture 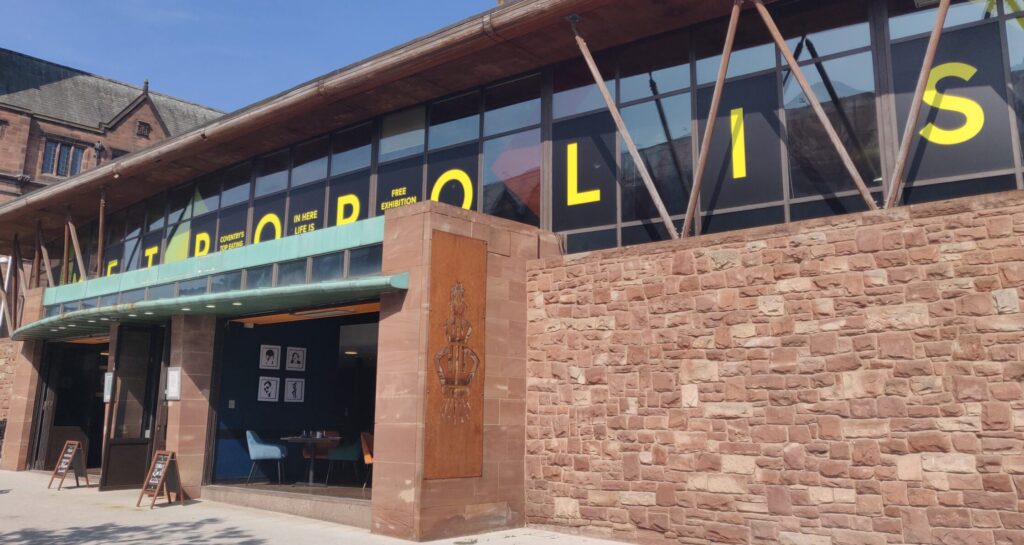 Coventry was quite muted compared to Hull. In Hull, activities were everywhere with flash mobs appearing in the street and dance performances in shop windows. There was an enthusiastic team at the train station on arrival but…Coventry opened post-Covid and is continuing against the backdrop of the ongoing pandemic and it’s a different type of city.

Coventry had ambassadors, but they were not very visible although we had a lovely conversation with a retired man who had been involved in many projects.

Hull can’t change its geographical location, in being perceived to be a long way from anywhere (it was just over 2.5 hrs from London by train) but its location also made the most of City of Culture with events in the Old Fruit Market and the marina, where the programme was strongly connected to its seafaring history.

It felt like the arts were more embedded in Hull than in Coventry, prior to City of Culture. Perhaps due to Hull’s affordability of maker space and studios and a long-standing art school. Coventry felt like it was using City of Culture to develop its arts and culture offering and to widen access which are some of the benefits that the year should bring.

They key takeaway from me, was that both cities were so much smaller than I remembered! I moved to both from a small town, so they would have seemed big but after so many years in London, everywhere seems to feel smaller than it is (not a bad thing!). Also, as many people have discovered since the Covid-pandemic, there’s great things happening across the UK and having more time to explore them has surely been a positive?

These are only my views from a weekend so I’m sure there’s plenty of good things happening year-round that those who live and work there can add (or correct me on!).

Coventry City of Culture runs until May 2022, so there may even be time for a return visit!

As for who is going to be the UK’s next City of Culture, after a record 20 submissions, the final eight were announced in October 21 who were awarded funding to develop their bids. Where do you think will be awarded in 2022?

Disclaimer: I lived in Coventry for three years as a student but hadn’t been back in  a long time so, I don’t know when changes occurred, some may have been years ago and others looked more recent, but they were all new to me.